Still quite a few hummingbirds! Rescue! 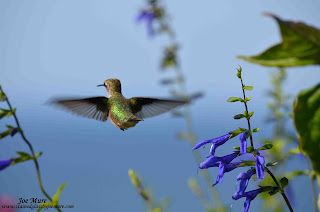 Closed for the season.

This morning in Baiting Hollow was superb: quite a few hummers still around (despite the north wind), no helicopters or other noise, other than the slap of waves on the beach far below, crisp sunny weather, blue sea and just the right amount of puffy white clouds overhead. The flowers are now at their peak. But of course, I had to go to work.....!

We have had good (though not very good) hummer numbers over the last few days, including saturday when we were open but few came to visit. Understandably people are now thinking of other things. So now we will be closed until next august. But I will continue to report on the hummingbird situation, as long as they are around, and as long as I still have good pictures (taken by you all this year: thanks) to post.

Just as I was about to leave, I noticed a hummingbird inside the rear cabin, and had to rescue him. I am more used to a hummer inside the front cabin, since I leave both doors open there and they often take a short-cut through them. On average I have to rescue one there once every season: they fly in (often as part of a chase) but cannot immediately find their way out. They then try to escape through the high, light-colored ceiling. But a hummer in the rear cabin has only happened once before. So I had to get the step-ladder, and try to corner the bird using a broom. Luckily I was able to push him gently with the broom behind one of the books perched up on the high window (it's there to discourage birds from colliding with the high window), and then, using the step-ladder,  reach in and (very gently) grab him. He relaxed immediately in my hand, and I took him outside, and opened my palm. After a second he flew off unharmed, as they always do. Of course it's like holding ..... air.

The picture is by Joe Mure, and shows a hummer enjoying the sea view.