Midway between the 3 houses at Calypso lies a grove of trees (palms, tropical almond and gum elemis) and inside this shady grove there's a clearing where we used to have seating for internet users - our wifi internet signal would not reach all the way from our house to the other 2, because of the concrete walls and large distances. I landscaped this area with various plants, such as heliconia, palms and ti plants. The above video shows a brief glimpse of this area.
My spot of good news has nothing to do with the hummingbird sanctuary, or the lawsuit, about which I've heard nothing new. Like everyone I actually have to work - teaching at Stony Brook University in the fall semester, and conducting a program of scientific work. As some of you know my scientific research is about the brain - in a nutshell, how does it work? The good news is that a technical scientific paper that we have been working on for several years was recently accepted for publication by a prestigious journal, "Biological Cybernetics". The work is rather specialized but I thought that I would try to give a layperson description in my next few posts - accompanied of course by tropical videos and hummingbird news.
The brain is rather complicated, and does many different things, and of course can go wrong in many ways. I am particularly interested in a rather ambitious question: how is it possible for humans, and perhaps some other animals, to actually understand things? Of course this is precisely what scientists try to do: understand things. To me it's perhaps the most fascinating aspect of the brain and its accompanying mind: what is "intelligence" and how is it achieved by the 100 billion nerve cells ("neurons") that compose our brain?
To make this more concrete, I focus on a part of the brain that seems to be particularly linked to intelligence, the cerebral cortex (or "neocortex"). This is the part of the brain that's most highly developed in humans, forming the intricately folded "gray matter" that forms the outer, visible (after opening the skull!) rind of our brain (light pink in the image below). It forms a large crumpled sheet, about the area of a tea-towel, and about a third of an inch thick.This sheet contains about 20 billion neurons - actually only a fraction of the total. However, it seems  that all our conscious thoughts and experiences are mediated by this sheet.

The neocortex recieves information from the rest of the brain, which ultimately derives from our sensory organs (eyes, ears, skin etc). It "processes" this information and send instructions to the rest of the brain, and ultimately to our muscles, so we can move and talk. However, even if the brain has no cortex (for example in non-mammalian animals such as birds and fish), it can still receive sensory information about the world, process it and produce appropriate instructions. But the cortex seems to be able to do this more "intelligently", largely because it's able to incorporate past experiences. In a nutshell, the current sensory information gets interpreted in terms of an internal "model" of how the world functions, so that quite complex behavior is triggered by the sensory stimulation. For example, if you see a delicious but expensive cake in a shop window you don't just smash the window and grab the cake. You decide whether you can afford it, and if not you might save up over many weeks until you can. 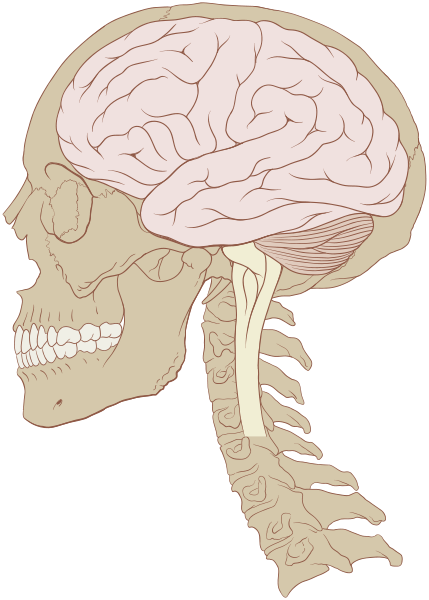