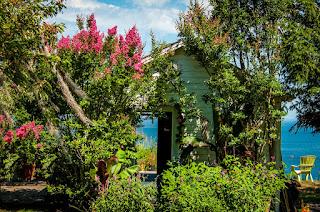 We are now closed to all except personal friends (and then only by appointment) until august 2016. In my next few posts I"ll be featuring recent photos by Michael Pawluk, for example the one above. In my next post I''ll write a "wrap-up" - an overview of the just closed month.

But for now I draw your attention to an opinion piece in today's NY Times, by Nicholas Kristof. He writes about his recent wilderness camping experience, and laments the ongoing attempt to "privatize" (i.e. commercialize) our fabulous national parks and other federal open space.  The comments are well worth reading, and one makes the important point that there are very few national parks east of the Rockies. Indeed the few along the east coast are usually a long drive and crowded. This makes it doubly important to preserve our dwindling open space and natural lands, especially here on Long Island, which is already as crowded as all other islands in the world, except for 16 others such as Taiwan. Indeed there is no national park on mainland Long Island (except for part of Fire Island), with its nearly 8 million people.

However there ARE (or, better, until very recently WERE) national park-worthy large tracts of land on Long Island. Indeed, there is (or was, until very recently) one only half a mile west of the sanctuary: Friar's Head, the former Talmage property (aka "the Grandifolia Sandhills", 450 acres with 1 mile of Long Island Sound frontage (yes, you read that right).
This candidate national park contains (or contained) 2 globally-rare natural features: perched parabolic sand-dunes and the best example anywhere in the world  ((yes, you also read that right). Anywhere else in the world (even N. Korea) would have made strenuous efforts to protect even one such feature, but The Town of Riverhead gave the golf resort then known as "Traditional Links" permission to bulldoze it on feb 1 2000 - and the following day (the dead of winter) it was a fait accompli.
More about this nightmare in my next posts. In the meantime I''ll  post some links that provide useful background reading to this disgusting saga in the column to the right of this post