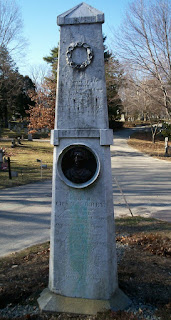 The gravestone of Charles Torrey, in Mount Auburn Cemetery, Boston.

"Memoir of Rev. Charles T. Torrey who died in the penitentiary of Maryland, where he was confined for showing mercy to the poor. By J.C. Lovejoy"

The Web in general, and Wikipedia in particular, is a mine of obscure but interesting information (as well as a terrible time-waster - but where does one draw the line?)

I recently came across the above interesting sentence while searching for something else in the Stony Brook University Library. The text of the excellent old biography is here.

And here is the first paragraph of Wikipedia article (from which the above photo was taken):

Charles Turner Torrey (November 21, 1813 - May 9, 1846) was a leading American abolitionist. Although largely lost to historians until recently, Torrey pushed the abolitionist movement to more political and aggressive strategies, including setting up one of the first highly organized lines for the Underground Railroad and personally freeing approximately 400 slaves (more than any other abolitionist). Torrey also worked closely with free blacks, thus becoming one of the first to consider them partners. John Brown cited Torrey as one of the three abolitionists he looked to as models for his own efforts.[1]

The article relates his tragic fate. At least he died knowing his cause was just.