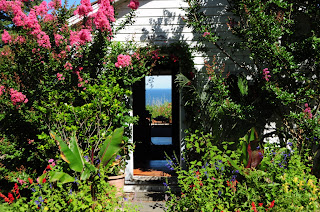 We are now more or less closed until august 2012. It's possible that if conditions are very favorable we might open for one more day in the next week or so, but don't count on it. It's also sometimes possible to arrange private visits - see lihummer.org. Please no spontaneous visiting!

Hummingbirds were fairly active this morning despite the wind and rain as I refilled all the feeders to keep them going for a few days. The wind will eventually shift to the northwest, and many hummers will move south. But we could then get a new batch from further north (rubythroats breed in Nova Scotia and New Brunswick). But on average numbers will dwindle until none are left by mid-october. I have seen hummingbirds here  in november and december, but I suspect they may have been Rufous hummers.
I will write a summary of the 2012 season at some point, but I would like to thank all my charming and well-behaved visitors, ranging from a few weeks old to nearly 100 years! A special thanks for all the touching small gifts!
I'll continue the blog off and on as long as I have new photos and interested readers, providing hummingbird news, and perhaps other related information and sheer opinion. For example: damn the South Fork helicommuters!
The picture, by Charleen Turner, shows the view through the front cabin doorways.
Posted by Paul Adams at 12:03 PM