The first picture, from Sandy, shows a hummingbird feeding at Pink Porterweed (Stachytarpheta mutabilis), one of the most popular plants at the sanctuary. I got it from the Peconic River Herb Farm (beautiful place). I had a purple porterweed (S. franzii) for several years, which was a hummer magnet, but lost it one winter (despite being indoors). On my recommendation, the Harb Farm got some porterweeds in this year, and they have been a great success, both here and there.


The continuing rain, and the hurricane we just went through, prompt me to say a little about global warming. I cannot do better than call your attention to an unusually clear and accurate article in today's New York Times: "Going Green But Getting Nowhere". The planet we know (and love) is changing rapidly, on a time scale of a very few generations. The changes will involve massive social and economic disruption (far greater than our present "recession"), comparable to a permanent world war. The science is clear-cut though the immediate effects are not. Hummingbirds know - they are already arriving slightly earlier, and lingering later (see hummingbirds.net - in particular, look at the slow change in the migration maps since 1996).
The only way to reduce the disruption is to immediately make drastic economic changes, outlined in the article. Individual actions, such as "going green" will have no impact; they are essentially merely a way of evading the problem. Unfortunately America is the worst offender and has progressed the least. Europeans only generate half the carbon load we do, and they adopted sane and decent (though still inadequate) policies long ago. The core issue is simply greed: we want it all, now, and don't care what happens later. In fact, many Americans simply refuse to think about the issue. Please do. 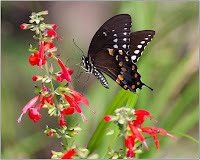 Enough said. This picture, by Chris Corradino, shows a spicebush swallowtail feeding on Texas sage (Salvia coccinea). While this is not as good a salvia for hummingbirds as some others, and is strictly annual, it self-seeds well. However, the leaves don't smell as good as many others.
Posted by Paul Adams at 7:10 AM