Open this afernoon 3-6; Hummingbirds sing with their tails! 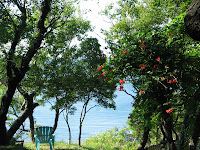 We will be open this afternoon from 3 to 6. Hummer numbers are dropping but we still have several, and the weather looks good. Please read the instructions and directions at lihummer.org if you have never visited. If you tell your friends about us, PLEASE ensure that they first read basic info at lihummer.org and then check with this blog that we are open. We currently have the untenable situation that more people are coming when we are closed than when we are open, because people explain where we are but neglect to mention that we are only open at specific limited times (and hardly ever outside of august). We cannot continue to operate if people show up at random! It's unfair both to them and to me.


Many of you were probably fascinated by the segment of the

beautiful "Nature" PBS Special on Hummingbirds. It showed Chis Clark's
work showing that the Anna male courtship dive involves production of short tones by air flow over tail feathers. There's an article in this week's "Science" (by Elias, Clark and Prum; the latter's wife was the producer of the film) that takes the matter further. Here is the abstract:


"During courtship flights, males of some hummingbird species produce
diverse sounds with tailfeathers of varying shapes. We show that these sounds are produced by air flowing past a feather,causing it to aeroelastically flutter and generate flutter-induced sound. Scanning laser doppler vibrometery and high-speed video of individual feathers of different sizes and shapes in wind tunnel revealed multiple vibratory modes that produce a range of acoustic frequencies and harmonic structures. Neighboring feathers can be aerodynamically coupled and flutter either at the same frequency, resulting in sympathetic vibrations that increase loudness, or at different frequencies, resulting in audible interaction frequencies. Aeroelastic flutter is intrinsic to stiff airfoils such as feathers and thus explains tonal sounds that are common in bird flight"

There's also a piece in the NY Times: dotearth.blogs.nytimes.com/2011/09/08/a-hummingbirds-musical-tail/
I will write more about this fascinating subject in the next blog.
The picture shows a trumpet creeper in full bloom.
Posted by Paul Adams at 10:35 AM