Updates on LaLa and Mme W

In Baiting Hollow, it appears that LaLa is doing fine despite some problems with the feeders (power outage in the area led to the heated  feeder freezing, and also wind damage to feeders - wonderful volunteers have fixed these problems. See https://www.facebook.com/bhhummingbird for photos and further info!

Here at Calypso, Eleuthera Mme's W's eggs have hatched! - I've seen her perching on the edge of the nest, and delicately feeding the tiny babies which are mere specks down in the bottom of the nest. Then she sits on them to keep them warm and protected. Though it was not raining today, there has been a lot of wind and the branch has been swaying wildly - impossible to film. Tonight and tomorrow morning it might rain again, so I expect Mme W will sit tight in the nest to shield her babies. But as the new cold front moves through the wind should shift to the north. The gumbo-limbo tree in which she's nesting is shielded from the north wind by one of the houses here, so if the rain lets up I should be able to film her feeding the young. But in the meantime here's a photo (by my son Jamie) of the deadbeat dad - or at least the putative father. You can see more of Jamie's bird photos, at Calypso and further afield, at his new blog http://photographicbirdlistomania.blogspot.com. 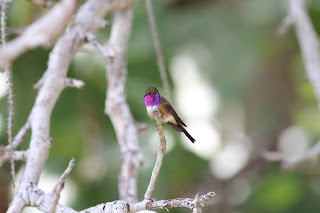