This evening, just after sunset, sitting on the front deck, I saw exactly the same behavior as yesterday evening. An adult male hummingbird (probably Pete, the nondominant guy we saw a few weeks ago) feeds at cuphea David Verity, then tries to feed  at the nearby feeder, whereupon he's immediately attacked by Fred, the boss. But this time I managed to film him feeding at the cuphea, despite the fading light. 2X slo-mo.

Fred has been trying out new favorite perches. Here's a clip I shot today in rather wet conditions:


Shortly before this I filmed him perform a short mating dance for an invisible female, but it did not come out well. The sequence is at normal speed and so has a sound track, which is the waves on the beach 150 feet below.

And here he is on a variant of this perch a few days ago, in the sun, and not quite as close up. You can here some kids playing in the background, probably at the 4H camp.


PS: as I sat on the front deck at 8pm overlooking the very mournful Sound an adult male hummingbird came to the feeder nearest me. Within second an angry Fred arrived with an aggressive whirr and chased the intruder away. Fred cannot see this feeder from his favorite perches, but he spends most of his time away from these perches, checking out his feeders and lurking in on possible intruders (or potential mates). A few minutes later a female came to the flowers, and a few minutes later a male (probably Fred), visitng successively Salvia greggii, S. splendens (the variety "Lighthouse Red"),  Cuphea "David Verity" and finally ther same feeder. Then a bit after that I saw 2 hummers chasing at high speed, then a hummer (I think a female) visiting coral honeysuckle, which is still blooming. There's a lot of S. guaranitica flowering but so far few visits - the hummers have yet to learn that though blue it's good. Then anorther chase, even though the light is getting bad. I have the impression that activity is beginning to pick up after the june doldrums. The volunteers that come the week after next should be in for a treat.
Posted by Paul Adams at 5:05 PM No comments:

Pink Porterweed; renewed call for volunteers at the sanctuary


Here's a vid from october last year showing a young hummingbird feeding at Pink Porterweed (Stachytarpheta mutabilis), a hummingbird magnet. It's difficult to find but Long Island Hummingbird Plants carries it. It's strictly tropical but you can overwinter it indoors- mine is blooming right now, though I've not yet seen Fred, our resident male, using it. And he's doing a very good job of driving all the other local hummers way from every corner of the sanctuary.

Posted by Paul Adams at 7:33 AM No comments:

Volunteering at the sanctuary 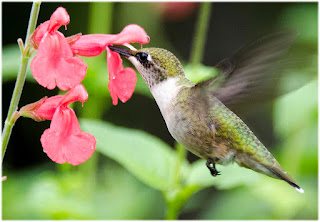 The photo, by DickSolo, shows a hummer feeding at Salvia greggii (Autumn Sage).
Posted by Paul Adams at 1:30 PM No comments:

I was filming a red climbing rose ("Blaze") on the front deck in Baiting Hollow, with the Sound in the background, when a hummer (Fred) sweeps in front of me and goes briefly to the adjacent feeder, and then takes off into the distance, to check out the rest of his territory.  2X slo-mo


And here's a frontal view of Fred taking off from his new favorite perch - I don't know why he seems to have largely abandoned the old favorite.

Fred on a new perch

Fred, the dominant male hummingbird at the Baiting Hollow Sanctuary, is using a different perch - a little bit closer, but still with an encompassing view of the western valley.. Here he shifts his position slightly. 2X slo mo

After the Martin Viette talk this morning arrived at the sanctuary at 1.20 (quick ride on the LIE) and took a needed nap. This evening quite a bit of activity on the front deck, but all very quick. This is the best I could manage. A female (Suzy?) stealing into feed at Lonicera sempervirens while Fred was busy elsewhere.

I lectured on hummingbirds at Martin Viette this morning at 10 am!

Here I'm lecturing at Martin Viette (East Norwich, see http://www.martinviette.com/2015-springsummer-seminars-festivals/)
at 10 am this morning! Thanks Donna DeSousa for the first photo. The talk was in a tent under the flaps of which lots of light leaked (which washed out my projected slides and movies), but the staff displayed some nice hummingbird-friendly plants, including the golden shrimp (Pachystachys lutea) which you see behind me. Everyone seemed to enjoy the event. 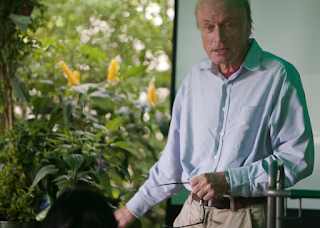 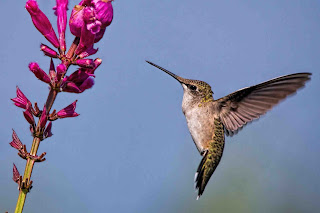 Photo by Mike Chachkes
Posted by Paul Adams at 6:48 AM 1 comment:


Here's a vid from this morning showing Fred perching on a dead branch overhanging the rear deck. Unfortunately he has he sky behind him, which blunts the colors. Shortly after he left tocontinue patrolling his territory, a female hummingbird arrived and started feeding at "Wendy's Wish" salvia. This is a hybrid of uncertain origin (S. mexicana, S. buchanii and/or possibly S. splendens), found as a chance seedling in an Australian garden. It has large magenta flowers and pink bracts resembling those of S. splendens van Houttei. It's very floriferous, but not hardy on Long Island.
Posted by Paul Adams at 9:46 PM No comments: