At the far southeast tip of Eleuthera (see map below, courtesy of http://www.bahamas4u.com/eleutheramaps.html) the island's finest beaches are found.  Note that Calypso is found near the middle of the island, approximately where it bends in a boomerang. 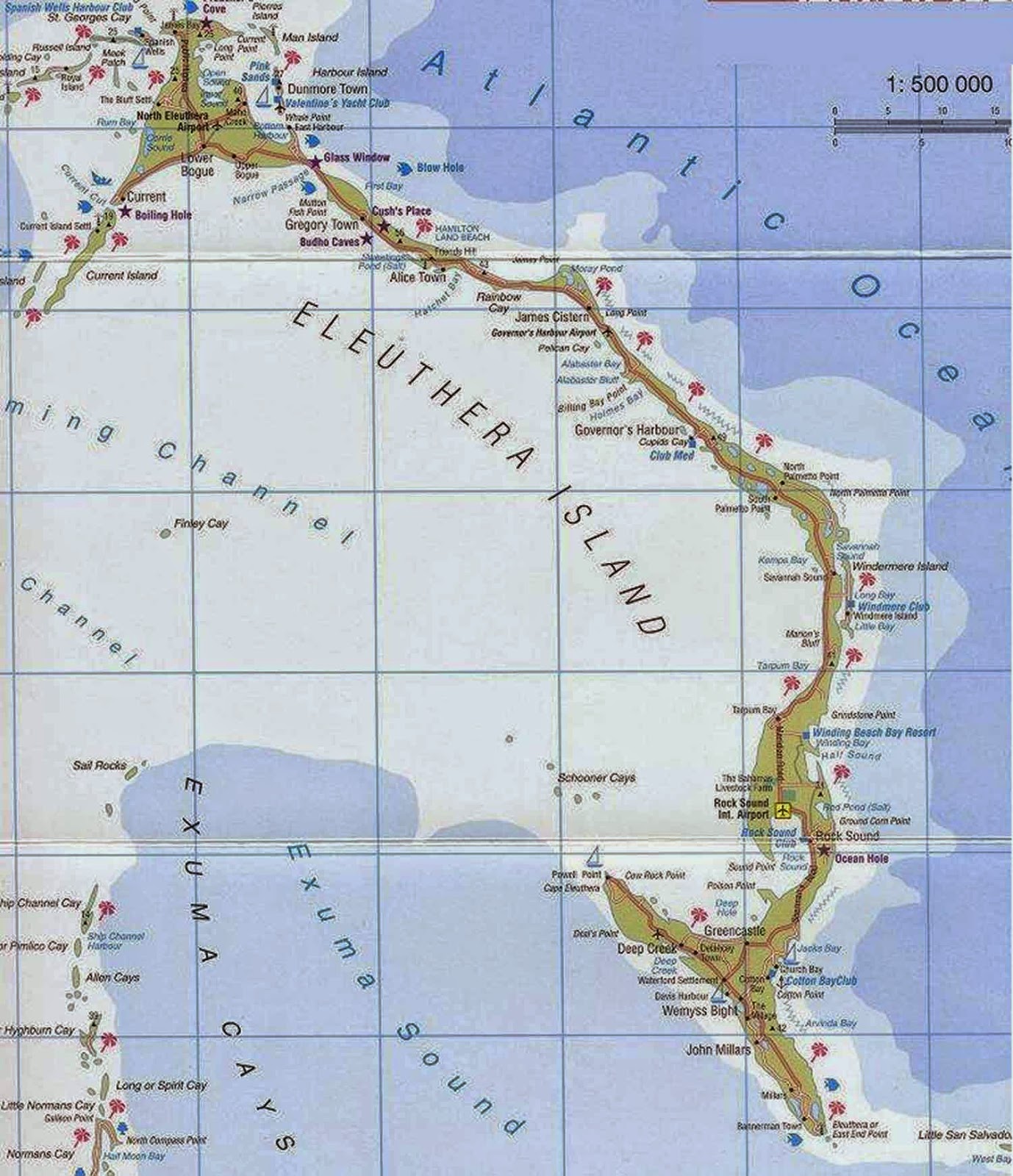 There are 2 rather different beaches, separated by a narrow promontory which ends in 3 islets. On this promontory sits an old lighthouse building (the light still operates, but is now automated). On the south side of the promontory is a curving bay lined with coconut palms. On the other, northeast, side, lies Lighthouse Beach itself, which stretches for many miles further north - utterly undeveloped and deserted. At the southeast end of this beach there's a high limestone cliff, which rises out of the ocean at it's tip, and northward runs progressively more inland, creating a wedge of palmetto forest at its base, fronted by dunes - a natural, secluded garden. The road to Lighthouse beach is quite long and badly rutted, so there's usually no-one - despite the fact that this all forms perhaps the most dramatic scene in the whole Bahamas.  We went there yesterday, together with 2 old friends from England (long residents of Brookline, Boston). Here are some videos.

one from Baiting Hollow


Sorry I've negelected the blog, partly because of internet problems. But here's footage shot just today, of a male bahama woodstar hummingbird perched on a twig. Note the purple/black gorget. No soundtrack because shot at 2X slo=mo.
Posted by Paul Adams at 3:11 PM No comments:

Here are a couple of short videos I shot in Baiting Hollow  in the fall, after the last hummer had left.

Posted by Paul Adams at 6:16 PM No comments:


Male Bahama Woodstar hummingbird perched on a twig. Most of the time his gorget appears dark, but a couple of times when he turns to the camera it flashes a brilliant purple. The next video shows a brief encounter between 2 hummers; the attacker is probably a male


Here's a male Bahama Woodstar hummingbird doing his thing on a twig of a Royal Poinciana tree (the spectacular flowers are long over, and now you see the huge hanging seed pods). He's guarding a very large clump of Firecracker, which I zoom out to show at the end of the movie.

I hope that all my readers will have a fabulous hummingbird season in 2015 (it only seems a short time since the Millennium!). While everyone is waiting for the first hummers of the year to arrive, late april or early may, I''ll be posting various hummer and garden vids to cheer you up. I wish I could post something substantive about the ongoing lawsuit, but my lawyer insists that I keep mum. Suffice it to say that it's still bubbling along, and casting shadows beyond the difficult year that's just past. Onward ho!
Posted by Paul Adams at 8:09 PM No comments: