All hummingbirds are magnificent but only one is Magnificent (Eugenes fulgens).  We are spending Thanksgiving in Arizona and I just filmed a Magnificent (the larger one) sharing a feeder with a couple of Anna's/Costa's. The Magnificent is, together with the Blue-Throated, the largest of US hummingbirds. It weighs at least twice as much as a ruby-throat, and is 2 inches longer. The adult male has an iridescent emerald-green gorget and violet cap (both visible in the video below). He looks rather dark, almost black, from the sides. and has a white patch behind the eye. It is found only in the mountains of the south west US, Mexico and Central America as far as Panama. There were several at the lodge where we are staying, in the Madera Canyon, and also at the Santa Rita Lodge just down the hill from us, where this video was filmed. There are many other hummers (mostly Anna's and Costa's) buzzing around the feeders there.

LaLa, the rufous hummingbird visiting the Baiting Hollow sanctuary, was still around this weekend. Here's a recent photo by S.S. Mitra, an expert birder who confirms it's almost certainly a rufous. 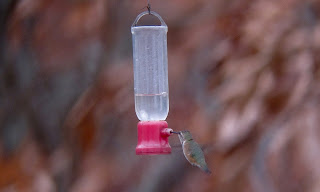 Posted by Paul Adams at 9:25 AM No comments:

Posted by Paul Adams at 9:36 PM No comments:

More Video of LaLa, the rufous in Baiting Hollow; comparison with Neutrino, a late rubythroat


Here LaLa, the rufous hummingbird currently at the Baiting Hollow Hummingbird Sanctuary, is visiting the little white flowers of Salvia "Waverly". The next video shows Neutrino, a late (october 5) ruby-throat at the sanctuary, for comparison - no red on the sides.

Rufous in Baiting Hollow - another clip


I'm calling her LaLa - since she hails from LaLa Land. More vids to follow soon.
Posted by Paul Adams at 10:23 PM No comments:

12.45. Sunny and cold. I'm in Baiting Hollow in the back cabin. I was just on the phone with Claire (both of us are doing well, though under doctors' orders), having finished lunching by the woodstove on delicious Morroccan lentil soup she made, when I glanced outside and saw, quite unmistakably, a hummingbird hovering persistently at a rosebud salvia flower. It was about 50 feet away so I could not see whether it was a ruby-throat or a rufous. I quickly whipped up some nectar and put up a couple of feeders near where she was. I had taken all my feeders down back in october.
I'll try to get some video, after my nap! It's only 44 degrees outside.

I spent an hour outside in the cold and saw the hummer 3 more times. I also managed to get some video which I will post soon. It's clearly a rufous hummingbird! (Selasphorus rufus).

PS - I posted one clip. I will post more tomorrow.

From Wikipedia:
"This is the western hummingbird most likely to stray into eastern North America. In the United States, a trend is increasing for them to migrate southeast to winter in warmer climates such asFlorida or on the Gulf Coast, rather than in Mexico. They are known to land in the Turks and Caicos Islands. This trend is the result of increased survival with the provision of artificial feeders in gardens. In the past, individuals that migrated eastward toward Canada and the northern USA in error would usually die, but now they often survive as they seem to spend more time in the warm Gulf Coast and Florida. Provided sufficient food and shelter is available, they are surprisingly hardy, able to tolerate temperatures down to −20 °C (−4 °F), so they can be seen in late fall in places such as the Upper Midwest, Great Lakes, and upper New England. As winter comes, birds in these areas normally head to the warmer Gulf Coast and Florida."
Posted by Paul Adams at 1:06 PM No comments: