I first came to the US in 1978, visiting Ithaca, San Fran and Galveston for job seminars (I'm an academic). The best thing I remember about the whole trip was the Golden Gate foghorns. I sat for an hour under the bridge enveloped physically and spiritually by these majestic noises. To me it was like a great symphony - Bruckner (rather appropriately) comes to mind, or perhaps Gabrieli (an antiphony). Listening to this video literally brings tears to my eyes. Is it still just the same? I have the impression the other vids on Youtube that's it's less rich and complex now. All 3 universities offered me jobs. I ended up in Galveston for 4 years and then Long Island. I suppose our lives would have been totally different. Perhaps I would have tired of this antiphony but I think not. Of course this video does not capture the physicality and bodily penetration of the real thing, one of the wonders of the world.
I've been in Stony Brook hospital for 3 days; no sign of real organic disease other than low blood sodium; no official diagnosis but unofficially seems like psychogenic polydipsia perhaps brought on by worry about the ongoing hummingbird lawsuit.
UPDATE: no real resolution of the underlying problems but nothing life-threatening. But now my wife is in hospital with multiple pulmonary embolisms.
Posted by Paul Adams at 7:44 AM 3 comments:

However,  in today's "Nature" an even more detailed study appears (by Prum et al), which changes things dramatically. Here is a comparison of the 2 evolutionary trees, Prum on the left and Jarvis on the right. 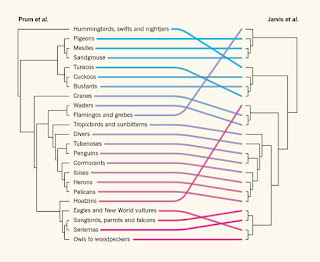 Amazingly, according to the new study, the hummingbird group branched off from all other extant bird groups right from the start! Thus they appear on their own at the top of the Prum tree. The other group of birds gave rise to all other living bird species!

However, the Prum and Jarvis trees differ greatly. Which is right? Prum et al argue that the earliest roots of the tree are tangled (see the way some of the red and blue lines cross each other) and under these conditions one needs a lot of data (genomes of a lot of current species) to correctly untangle the longest twistiest roots without breakage (a problem every gardener knows well).

The reason for this appears to be that almost all primitive bird groups died out at the K-T transition, the massive meteor event,  65 million years ago,  that wiped out the dinosaurs, and also triggered massive diversification of primitive mammals (an event without which you would not be reading this).
The world recovered quite rapidly (on a geological time scale) from this catastrophe, and the few remaining bird groups then underwent a rapid explosion of diversification. Was the fact that a few protomammals and protobirds survived while dinosaurs did not, mere chance, part of God's plan, or because these groups could more quickly adapt to the new conditions? More to follow.......
Posted by Paul Adams at 8:56 AM No comments:

Neutrino has left; salvias bloom on


I got back to the sanctuary on saturday morning, and was disappointed, though not surprised, to find that Neutrino, my last hummingbird of 2015 has left. No hummer activity at all over the last 3 days. Lots of salvias in bloom, but no customers. Here is a video I shot to show the rosebud salvias, viewed from my favorite corner of the front deck. You can also glimpse red maples turning scarlet on the opposite hillside. I was fllming into the glare of the low sun, which accounts for the splotches of light 9and probbly my lens needs cleaning)  Sorry about the 'background" noise (leaf-blowers and a very noisy hedge trimmer) coming up from the valley below. "Landscapers" were hard at work all day, from 10 am to 6.15 pm (after sunset) making sure no leaves from the surrounding forest were left on my neighbor's small lot. Tomorrow will bring new leaves, and perhaps more "landscaping", but I will not be here. A sisyphean, pointless and cacophonous routine, almost all year round. It's at times like this when I dream of England, where no-one would be rude enough to use a leaf-blower. But there are no hummingbirds either there.
Posted by Paul Adams at 8:49 PM 8 comments:

Report from the Sanctuary: Neutrino in residence and up close!

After over a week of bad weather and slightly better work, I returned to the sanctuary expecting not to see any more hummingbirds. Almost all the feeders were empty and many had blown down, but quickly I saw this fine fellow (I'll call him Neutrino in honor of today's Physics Laureates) visiting the only full feeder that had not become blocked by pollen. Be sure to view the video at 1040P resolution!


Judging from the body shape think it's a young male, though there's no hint of red on the throat. Many of the flowers are in great shape, but there was clearly a lot of wind, with debris everywhere, and many of the feeders down. After a rather difficult week it's a delight to be here, I instantly feel happier, healthier and more relaxed, though half an hour of my neighbors' "landscaping" with very noisy leaf-blowers did dent the relaxation. But back to work tomorrow!

Posted by Paul Adams at 2:25 PM No comments:

Because of work, bad weather etc I've not been at the sanctuary for a week - but I suspect I've not missed much. Probably all my hummers are gone, but I'll see tomorrow. Meanwhile, here's a brief video I shot showing sunset on the first day of fall. Note that now it's setting over land - in fact very near Old Field Point where it set exactly on the last evening of summer (see my last post). It will set over western Long Island for the next 6 months.

A few months ago I "upgraded" my computer to the new MacBook - the 12 inch Retina model. While the screen is a bit bigger than my "old" 11 inch MacAir, and many other details are better (especially the super-sharp Retina screen), it has big problems even though it was rated as the best laptop ever. Several of the keys don't work well (they changed the keyboard technology and have not yet worked through the bugs). And though the new version of Imovie is in some ways better, I need to learn a lot of new stuff. The bottom line here though is that I've been frustrated that when I upload video to Youtube for this blog, they were showing up at lower resolution than using the old Mac (740P instead of 1040P). Well I finally discovered why, and here's a clip uploaded at the proper resolution. It's from 10 days ago and shows a  young hummer perching on a stalk of bog sage and feeding at the sugary flowers of rosebud sage (4X slo mo):


Finally here's a hummerless clip of my Cape Honeysuckle, Tecomaria capensis, which is finally blooming after remaining mute all summer. In the Bahamas it's a hummingbird favorite but here, after a winter indoors, it only gets going as the hummers leave.

Posted by Paul Adams at 8:44 PM No comments: