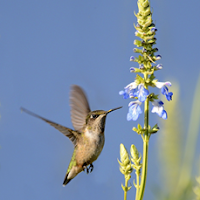 The rubythroat typically doubles its weight (from 2 to 4 grams; 2 pennies weigh 3 grams) prior to migration.He converts the sugar he eats to brown adipose tissue primarily around the belly. Indeed, some get so heavy they have slight difficulty taking off, like an overloaded plane. However all this extra weight will be burned off during the epic flight across the Gulf of Mexico (of which more later). 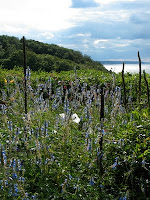 The first photo, by Doug MacLean, shows a hummer feeding at the skyblue flowers of Salvia uliginosa (bog sage). The second shows a general view west with bogsage and mullein spires, and the large faded white flower of Datura.
Posted by Paul Adams at 9:57 AM

Email ThisBlogThis!Share to TwitterShare to FacebookShare to Pinterest
Labels: migration