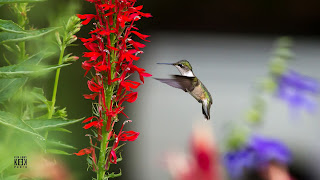 Here's a recent photo by Ken Eddy with a hummingbird approaching a 4 star favorite, cardinal flower. This is a Long Island native perennial that grows along the banks of rivers such as the Nissequoge, the Peconic, the Carmans and the Connetquot. Wherever it grows (along the river or in your yard) you are likely to see hummingbirds.
We are open today thur aug 15 both am (9.30-12.30) and pm (3-5.30) BUT ONLY TO THOSE WITH A COMPLETED WAIVER. We will be open tomorrow (friday aug 16) am but not pm. The opening on saturday will honor Dennis Puleston, the great Long Island AngloAmerican naturalist and bird painter.

I never met Dennis but I have (or had) several friends who did, including Charlie Wurster, who used to be a neighbor on Crane Neck (Old Field, L.I.). Charlie lived in what used to be the gardener's house on the Childs estate, and we in the chauffeur's Sears-Roebuck cottage. Puleston and Wurster founded the Environmental Defense Fund, and were insrumental in saving the osprey from DDT (the DDT issue is a complicated one best addressed elsewhere). However I first learned about Dennis from Marion Homire, a wonderful old lady (and expert birder) who also lived nearby, and who passed away at almost 100 more than a decade ago. Perhaps somewhere I still have her memoir "My Grandmother Burned Peach-Pits" about her childhood on a farm on the fabled and now-vanished Hempstead Plains, which was I believe the largest prairie east of the mid-West. It's now Levitt-town.