NO Admission without Waiver; Puleston Day 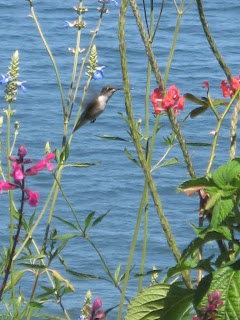 Today's photo is  recent one by Patricia Shi. The flowers are pink porter weed, "Mulberry Jam" salvia and Bog Sage. Long Island Sound is in the background. 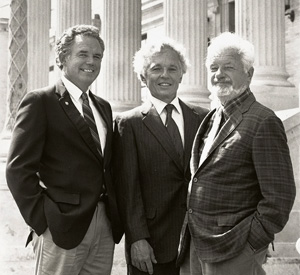 Today's opening (Sat aug 17 9.30-12.30 and 3-5.30) honors Dennis Puleston (on the right in the photo,  with Charles Wurster center and Art Cooley, left, the 2 other EDF founders, on the steps of the Supreme Court) who lived for many years in Brookhaven Hamlet, on Long Island.  Puleston was born in England in 1905, became an American citizen in 1942, and died on Long Island in 2001. He was the founding chairman of the Environmental Defense Fund and was instrumental in saving the osprey on Long Island. He wrote several marvelous books, including  "Blue Water Vagabond" about his many adventures on a 6 year round-the-world sail. He received the US Medal of Freedom for his war work, worked at Brookhaven Lab for many years, and extensively observed, painted and described Long Island birds. There is currently an exhibition of his painting at the Suffolk County Historical Museum in Riverhead. I hope he would have been delighted to learn of the existence (since 1998) of the hummingbird sanctuary, overlooking the Sound he loved to sail.
Charlie Wurster is still very much alive, and recently wrote the article which is the source for the above image.
We are open today (but not sunday)  9.30-12.30 and 3 - 5.30 BUT YOU MUST BRING EITHER A SIGNED WAIVER, a copy of a Puleston book,  a photo of the Dennis Puleston Warbler Woods Preserve (which is located on the Middle Island - Yaphank road), or name the bird that saved Puleston from becoming a war prisoner in Japan. See also my post for aug 15.
Posted by Paul Adams at 12:42 PM