LaLa still here, and one more too! Rufous, Allen's or "Selasphorus"?

LaLa is definitely a member of the western hummingbird genus known as "Selasphorus", which includes the Rufous (S. rufus), the Allen's (S. sasin), the Broadtailed (S. platycercus), the Calliope (S calliope, the smallest bird in the USA) and several more southerly  species (e.g. Scintillant and Volcano).   I and several real experts think she is a rufous, based on probability and appearance, but the only real way to be sure is to capture and measure the bird - and there's only one person licensed to do this in NY State, and he's far upstate. So, many birders prefer to be cautious, and refer to a member of this genus, in the absence of definitive fieldmarks or direct measurement, as a "Selasphorus". Indeed the New York State Records Committee requires definite identification to list a specific bird as a rarity.

Until very recently John Shemilt was hosting another Selasphorus, which he called "Ginger", at the entrance to the South Fork. Here she is (thanks John for the excellent photo): 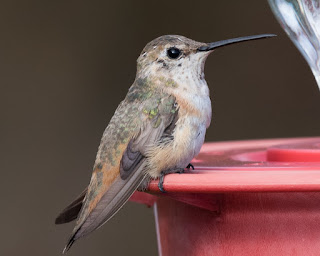 However, Ginger departed earlier this week, while LaLa is still present the Baiting Hollow Sanctuary (as of friday). John suspects Ginger is a Broad-Tailed - the same species as the bird I saw at Mary-Jo Ballator's Arizona sanctuary.

It's rather extraordinary that 2 selasphoruses should be simultaneously in residence on the east end of Long Island.  We must be doing something right, and it's great fun for those who miss our summer hummers.

According to http://beautyofbirds.com/rufoushummingbirds.html, the rufous makes the longest migration (relative to its length) of any bird. And of course LaLa has gone even further.