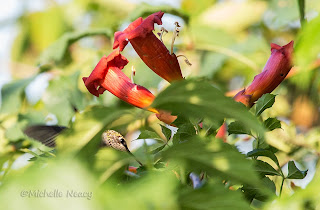 We are open today 9.30 to 12.30 to all-comers and 3-5.30 only to those who have not yet visited this season. No bell-ringing today please - it's the weekend. Yesterday activity was rather low, though everyone saw hummingbirds, usually several. I'm beginning to wonder whether, just as the season started early, it will end early. The wind will shift to the north today, making matters worse. We will probably be open tomorrow, but only to "newbies" (but check this blog). We should be open monday (newbies) and tuesday (all-comers), and then will only open a few more sporadic mornings or afternoons before completely closing for the season.
Today's first photo is again by Michelle Neacy, and shows trumpet creeper (or trumpet vine) flowers. At first glance there is no hummer but then one spots him half hidden behind a leaf. He appears to be exploring the base of a flower, rather than the opening. I often seen this, and it seems that many hummers find the flower itself a bit too long, despite the fact their tongue can reach much further than the tip of the beak. There are often holes at the base made by nectar-robbing orioles. Although trumpet creeper is a good hummingbird plant, I do not rate it as highly as many others, and only give it 2 stars. A better vine (***) is coral honeysuckle: less invasive, far longer blooming, and more nectar. Here is a photo, by Joe Mure. 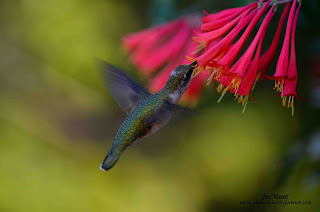