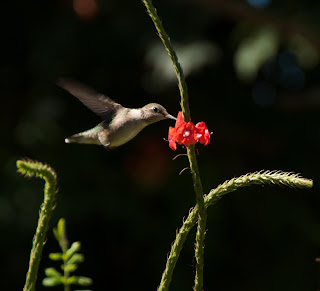 Unfortunately we are unable to open today (wed) either. In a nutshell, the Newsday article on monday (over which I had no control) understandably triggered an intense burst of interest in this little sanctuary (hits on the blog went from 50 a day to over 1400), with a lot more visitors than usual. While most visitors were able to park in our designated lot, some were forced to park on the side of Terry Farm Road, and there was, briefly, an unusual volume of traffic on this narrow, private dirt road.  (In contrast, on the preceding saturday afternoon, with beautiful weather, we only got 4 visitors in 2 cars). However, as far as I could see on monday the road was never blocked. Apparently the owner of a small neighboring vacant parcel of land called the Town Attorney's office with some sort of complaint, and they sent up their Code Investigator.
He seemed a bit puzzled by the situation but asked, quite reasonably, that we close the sanctuary to public visitation for a few days until his office could determine the legality of the situation. We hope to re-open, in some form, as soon as this matter is clarified.

We have operated unobtrusively for 15 years.  We are only open in august, and only on the selected days posted on the blog.  In addition we sometimes admit private organized groups (birders, photographers, school-groups, gardeners), but only by prior, detailed, arrangement. (We suggest you join your local Audubon chapter and ask them to organize a group visit, if they are not already doing so). We never advertise or even announce the existence of the sanctuary, because we are not set up for large numbers of visitors, and want only those few with a genuine interest in hummingbirds and hummingbird gardening to come. AND WE EXPECT ALL VISITORS TO FIRST DO THEIR HOMEWORK AND STUDY THE MAPS, DIRECTIONS, WARNINGS AND INSTRUCTIONS AT THIS BLOG AND AT LIHUMMER.ORG.

Almost all our visitors over the last 15 years have enjoyed their time here, but it's not for everyone, it's rather inaccessible (which is partly why it's nice) and you need to come with the right attitude and shoes.

I hope we can re-open soon before the hummingbirds all fly south for the winter. In the meantime we are sometimes broadcasting live from the sanctuary (see webcam link on right), yesterday for an hour in the morning and afternoon, and then for over half an hour in the evening (when we were able to follow several hummingbirds around the garden, with one inches away from the camera). Today we hope to broadcast around 9.30 am, around 3.30 pm and from 7.40 until after sunset.

The pictures were taken here recently by Amy Halpin (top; pink porter weed) and Steve Abatzidis (bottom; bog-sage). During this difficult time, we appreciate any supportive comments posted at the blog, especially if you have successfully visited in the past. 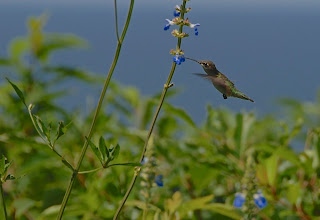