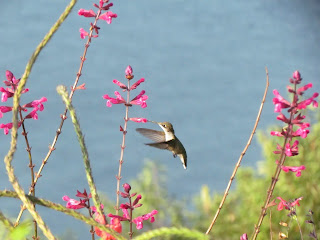 Last night we had the first proper sunset since at least a week. The wind shifted to the north west, the air dried and the visibility and light improved greatly. Hummingbirds were quite active until at least 15 minutes after sunset, making up for lost time. It was too late for them to take advantage of the wind shift to depart southward. Around sunset itself there was a lot of chasing going on around the front deck overlooking the sea: clearly very young hummers were desperate to feed in the fading light, but the owner(s) of the flower beds were ruthless in chasing them away. I tried to take video but I have not yet reviewed the outcome - I hope to post some results soon. Then one by one they all vanished - except that when I thought all was over, a shy bird came to feed unmolested in the last light. He spent at least 6 minutes feeding continuously, flitting from flower to flower, occasionally perching on a stem for a second or so before resuming. I have never seen such a long feeding episode before - clearly a single bird. Finally, as the light disappeared, he headed off towards the gloomy forest.

Today's photo is a recent one by Maria Dottavio. While the sanctuary is now closed until aug 2014, there are still some opportunities to visit privately, either as a group (minimum 10 people) or by appointment at specified "slot" times. One available slot is friday at 3.30; others may be available sat am/pm and sunday pm - please check the blog for details, or email me.

Resuming my account of the mystery of sex, I can recommend a book on the topic by Mark Ridley (who wrote one of the very best standard texts on evolution). The book is for the "intelligent layman" (or, rather less neatly, "intelligent layperson" - in fact "very intelligent layperson"!). There are 2 versions around: "Mendel's Demon" (the original UK title) and "The Cooperative Gene" (the US title). I prefer the former title, since it gets more to the heart of the matter, and also alludes to a related idea, "Maxwell's Demon" (which would itself be a nice topic for a future post, if ever I can link hummingbirds to statistical physics!). "Mendel's Demon" refers to the way that in sexual reproduction genes from the 2 parents are shuffled together in the offspring, rather like a hand of cards that contains both red and black suits. The book explains why the sexual shuffling process is essential to get complex organisms (multicellular organisms that contain many different cell types, and which are visible to the naked eye - essentially life "as we see it" rather than "life as we know it", which includes invisible single cell organisms such as bacteria. In fact he argues, correctly I think, that the most important thing about life is not that it exists, but that it exists in complex forms. Many planets might carry simple forms of life, but only on a few very favorable planets did life assume striking complex forms, such as trees, tigers and us. Furthermore, he argues that the key to the appearance of complexity was not Darwinian evolution itself, but the development of sex. More to follow.......