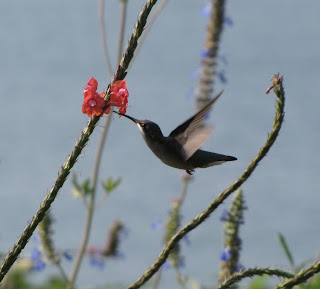 Although we are now closed there are still a few opportunities to visit at specific, mutually-agreed times. The remaining available slots are today sunday sept 8 at 3 pm prompt and tuesday sept 10 at 10 am promptly. Please email me if you would like one of these "slots", giving the number of people, their walking ability, and your car plate #.  NO visiting without appointment - we are now CLOSED.

Today's picture is a recent one by Walter Bednarczyk. The hummer is feeding at Pink Porterweed, Stachytarpheta mutabilis, a 4-star plant. The only place I know of that carries it on Long Island is, naturally enough, Long Island Hummingbird Plants.

Continuing my expurgated, rather academic, account of sex, we need to know what a "genome" is. It's simply the DNA (packaged inside cells) that carries the instructions to build that organism. Simple organisms like bacteria have a small genome, with typically only a few million units (or "bases") making up their DNA. Asexually reproducing organisms cannot evolve genomes much bigger than this. These compact genomes cannot build a  complex organism - even one as rudimentary as an ameba. Why can't asexually-reproducing organisms develop the large genomes chacteristic of complex life (such as the 3 billion units of human DNA)? Remember that Darwinian evolution is all about natural selection of inherited variation. The inherited variations in asexual reproduction (e.g. by bacteria) is caused by random mistakes in copying DNA - mutations. A mutation that leads to a more-efficiently living and reproducing organism will be selected, and become more frequent in the population. This is the basic dynamo of evolution. But most mutations aren't advantageous, and will be eliminated, also by natural selection.

However, too much mutation is a bad thing. In fact, if the mutation rate is too high, evolution becomes impossible: natural selection cannot weed out bad mistakes fast enough. They accumulate and weaken the popultion to the point that it goes extinct. As a rule of thumb the mutation rate must be less than one over the genome size for evolution to operate at all. Indeed, in most simple cells the mutation rate is about a thousand times smaller than 1/genome size. This very low mutation rate reflects the elaborate and highly accurate enzymes that universally catalyze DNA copying.

But this low mutation rate, while necessary, means that evolution cannot quickly adapt to rapidly changing environments. If the mutation rate were higher (for example, comparable to 1/genome size), evolution cannot occur either. So asexually reproducing organisms are between a rock and a hard place, and can only survive by having very small genomes, sufficient only to program a simple cell. If life had stayed asexual, it would have remained an insignificant bacterial scum veiling the earth. But at some point cells learned how to reproduce sexually. As I will explain in Part 5, this turbocharged evolution, and allowed the emergence of large genomes and complex life.
Posted by Paul Adams at 8:20 AM