Back on april 15 I reported the early arrival of a male ruby throated hummingbird on the North Shore of Long Island, not very far from the Baiting Hollow Hummingbird Sanctuary. This male settled in, but now a second male is also claiming this yard as his territory. It will be interesting to see how they settle this: will one take over the whole place, or will they agree to split the goodies (an excellent hummer-friendly yard full of flower and feeders, and hopefully a bevy of visiting females)? More to follow. But here's a recent photo. 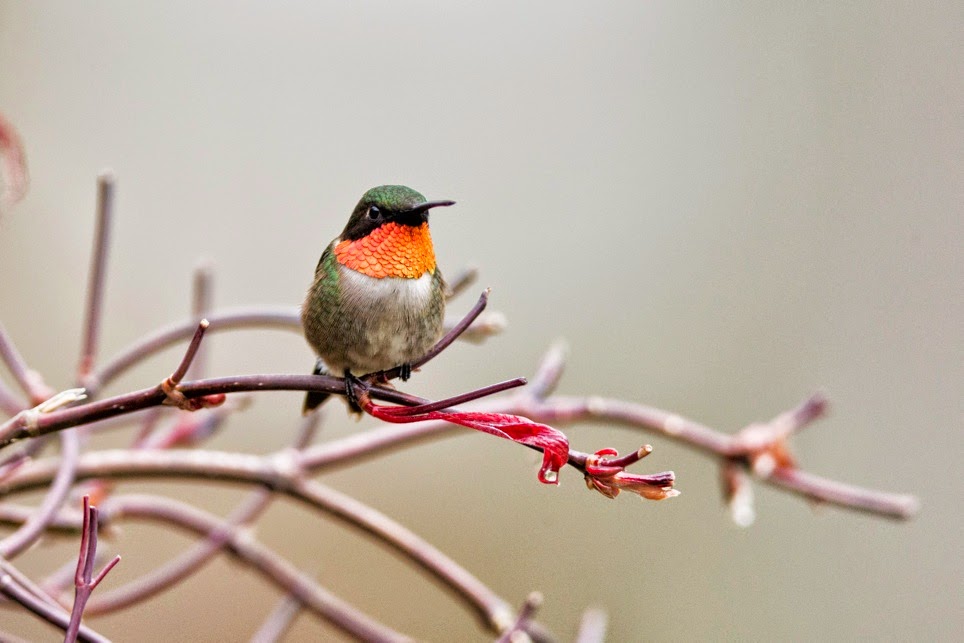 Continuing our short journey into the brain, we saw how the neocortex is divided up into specialized areas, with information sent from one to the next, and gradually distilled down to ideas, thoughts, plans, concepts etc. But how is the information sent and, most important, how is it transformed? For example, how does the cortex figure out that what one currently sees (basically the snapshot of the world provided by the eyes, a vast array of pixels like the output of a digital camera) is a cup, a hand, a computer screen or a hummingbird (and sometimes several of these at once?) This blog has hundreds of snapshots of hummingbirds - what do they all have in common? One might suppose they all have particular shapes, colors and textures - for example a red throat surmounted by a green head with a long narrow protruding beak. But what exactly does a "head" look like, or a throat, or a beak? And if the head is made up of eyes, ears, and sometimes feathers, what exactly are all these? Can one say that a particular set of pixels (basically, just an array of numbers) is a head?

The general idea is that things are made of parts, which are in turn made of other parts, and so on, until one gets to "parts" that are made of certain arrangements of pixels, in a hierarchy. Parts at the bottom of the hierarchy might be extremely simple shapes such as lines, or blobs, or wiggles. At each level of the hierachy, the "parts" would be represented by numbers - rather obviously so in the case of pixels. Thus an image could be described as an array of pixels at the bottom of the hierarchy, but also as a set of oriented short lines at various positions at the next level, and so on. At each level the number currently associated with each part is represented as a voltage across the membrane of neuron (or as a frequency or "firing rate") - like AM or AM radio. Neuroscience knows a lot about how these electrical signals are generated.

But the crucial step is moving from one level to the next: all the neuronal voltages at one level (e.g. representing pixels) have to be converted to new sets of neuronal voltage (eg representing oriented lines) at the next level. This is done because each neuron at one level contributes a little bit of its voltage to each neuron at the next level: a neuron at level 2 combines the voltages from many neurons at level 1 (but far from all), to varying degrees, depending on the strength of the connections from level 1 to level 2. The pixel to line transformation requires very specific connections between the 2 levels, each with its own particular strength, or "weight".

Now if one simply followed this recipe from level to level, one might as well go straight from the first level (the eye) to the last (the level that decides what one is seeing), combining all the mixing done at each level into a final blend, rather as when making a cocktail just adding in all the ingredients at random, without paying attention to their order. But in fact the order is vital, which means that a neuron must nonlinearly transform its weighted incoming signals before sending them to the next level.

The overall recipe for each neuron is, take the signals from a specific set of neurons in the previous layer, weight each one by some magic factor (2 spoonfuls of this and a pinch of that), shake them together into a single blended number, and then send not this number or a proportional number, but a number that's related by some sort of nonlinear formula to the blended number. One can think of this last step as analogous to "cooking": one combines the ingredients according to the recipe, then (depending on the type of neuron) one bakes, boils, roasts, fries or steams them into something which will in turn become an ingredient for many more recipes. Probably there are some complicated gourmet dishes which involve a similar series of cookings and blendings.

Clearly a key step in all this is those magic weighting factors (e.g. a pinch of salts and 2 pounds of potatoes, rather than the converse). But even more important is the question of how these recipes are written. Who writes the recipes in the brain? God? Darwin? Or the brain itself?

I suspect the last. Indeed, this is the heart of the matter. The recipe that each neuron uses is continuously adjusted to as to improve the taste by the cook - the neuron itself. In my next post I try to explain exactly what goes on in an individual neural connection - a "synapse" - during this recipe-adjustung process. In closing I will just note that the brain is made up of a quadrillion of these synapses - that is
1000,000,000,000,000 of them! The brain is made up of synapses in a way that's similar to a drop of water being made up of H20 molecules. But a synapse is more complicated, and cleverer, than an H20 molecule, and can do many more things.
Posted by Paul Adams at 4:04 PM