We returned safely to Long Island late tuesday evening from our marvelous family Thanksgiving trip to Costa Rica. Otto, the first hurricane ever known to have hit Costa Rica, passed just north of us at the border with Nicaragua, as we were hunkered down at the foot of Arenal Volcano. While all we got was a bit of wind and considerable rain, communities just 30 miles north of us near Aguas Claras and above all Upala were badly damaged. Otto claimed at least 23 lives, ten in Costa Rica. The rainfall caused several mudslides along our path to the Caribbean lowlands after Arenal, and prevented us from staying in the riverfront lodging we had planned (though we were allowed to stay a bit further back from the Sarapiqui river).

Here I'm featuring some hummingbird photos taken on or near Poas Volcano by my second son Jamie, who's a possibly even more avid birder than Rafael, the eldest. Actually I shamelessly and ruthlessly purloined these images from his deliciously humorous blog http://ncbigyear2014.blogspot.com/, which you should consult for more details, good giggles and great photos of incredible non-hummingbirds.

To whet your appetite here's a list of the hummers Jamie photographed, and I show below, in the first 2 days in Costa Rica: 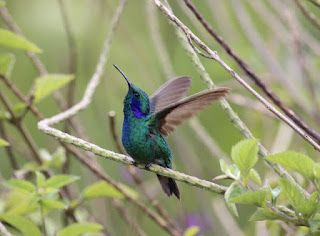 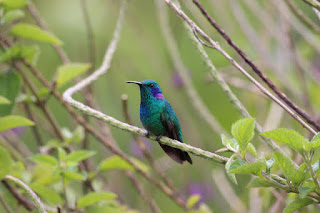 Here the Violet-ear puffs out his "ears", which are actually part of the gorget: 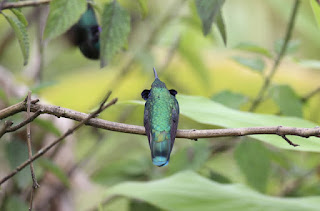 Jamie thinks he does this when he (the hummer!) is miffed though he (Jamie) used a stronger word.

And appropriately on the approach to Poas Volcano, the Volcano Hummingbird: 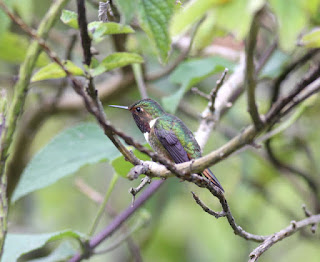 which should be compared with the Magenta-Throated, which has a neater shorter gorget and white flank marks: 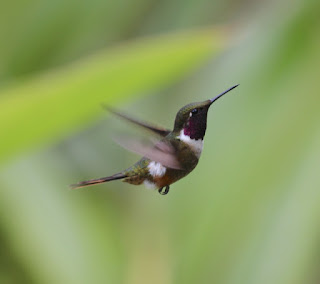 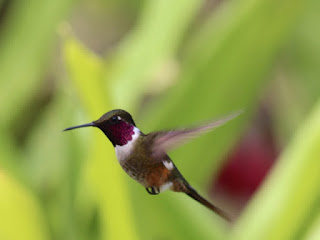 Next a striped-tailed hummingbird (note the buff "shoulder"): 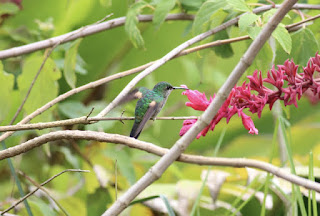 and a fiery-throated (unfortunately but nevertheless impressively photographed from the rear): 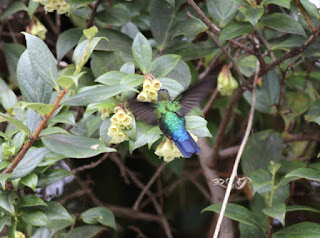 then a presumed female scintillant: 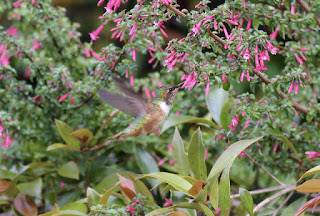 In such company even the Magnificent Hummingbirds we saw start to pale (we also saw these in Arizona last Thanksgiving, as some of my more dedicated readers might remember): 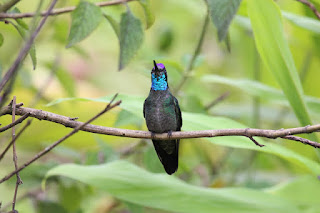 Last,  purple-throated mountain-gems, with my hand to show the size of the female. I already posted a vid of one of these. And on the right the superb male. 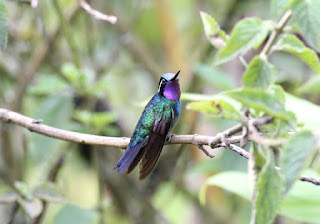 "This Purple-throated Mountain-gem was captured by my father who was intending to bring it home to his hummingbird sanctuary in Baiting Hollow, NY.  However, I convinced him to let it go free. I am kidding of course, he only put his hand there to show how tame these birds are and never actually touched it."

I was indeed sorely tempted to bring some of the amazing hummers back with me - but instead and even better I've just heard that 2 (YES TWO!) rufous hummingbirds are now in residence at a North Fork backyard (NOT at the Sanctuary)! More details to follow.