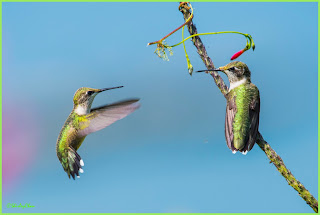 This recent sanctuary photo by Shirley Chan shows a typical face-off between 2 hummingbirds. They are very similar, and very aggressive, to each other. One hummer is perched on the stem of porterweed, perhaps the best of all hummingbird plants, obtainable only at lihummingbirdplants.com

Rockport is in the news because of the devastation caused by Hurricane Harvey. But it was already famous for hummingbird enthusiasts because of it annual festival, which was going to be held this year on sept 14-17. It's timed to coincide with the peak of the southward migration on the Gulf Coast, when millions of hummers congregate in the town waiting for a favorable  north wind to speed their way across the Gulf of Mexico. At times the daytime sky there can be black with the crowds of hummingbirds. With a favorable tailwind they can make it across the Gulf and into the Yucatan peninsula in 14 hours of nonstop flying at cruising speed of 30 mph. But if the wind should turn to the south or storms brew they are probably doomed -  though fishing boats and oil rigs can offer help to some - their decks can be covered in resting hummingbirds trying to outlast the weather. My guess is that a hummer has only about a 50% chance of making this crossing both ways - but they have no choice, and for thousands of years enough survive that the species flourishes.
Here at the sanctuary hummers are feasting at flowers and feeders, fattening up to fuel the incredible journey they soon face - each one alone and usually for the first time. They need to double their weight to attempt the gulf crossing - and in the course of that epic flight their weight will fall back to half the take-off weight, as they consume fat to power their wings. Everything about them is a miracle, but almost everyone on Long Island can get to see them in their own back-yard (or, until sept 15, in mine!), with a little effort and love. I will soon (middle of next week) be posting new available dates for visiting (by appointment only) for the remaining 2 weeks of the season.
New visiting dates are posted at the previous post ("Lawsuit").
Posted by Paul Adams at 6:05 PM