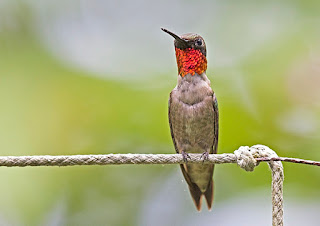 We are open this tuesday morning (9.30-12.30) but not this afternoon. We will probably be open both am and pm on wednesday but please check the blog for confirmation.

On sunday morning a group of photographers from "Nature and Wildlife Photographers of Long Island" (NWPLI) came for their second visit this year. After a quiet start hummers became active and I think everyone got good pictures, some of which I will be posting in the next few days. I start with this nice full-frontal image of an adult male, taken by Laura Eppig. You can see the characteristic brilliant red throat "gorget", and the forked tail, and the tiny feet, clinging to what looks like a rope but is just a piece of string. The gorget is made up of numerous tiny feathers, which the male can protrude like a ruff. The gorget's color is generated by iridescence not pigment, and therefore only looks red from the front. From the side it looks black. However, though the gorget is small, it can generate a highly visible red flash from a distance as the male turns in sunlight. The male turns his gorget towards the female he is courting as he approaches the nadir of his U mating dance (see my post of July 11); the female judges the perfection of this dance. Note that juvenile (i.e. hatch-year) males will only acquire their full gorget on their central american wintering grounds, though some already have one or more individual gorget feathers. One can sometimes use the distinctive pattern of these, which look like drops of blood, to identify particular individuals.
The NWPLI photographers are highly skilled and if you are interested in bird photography you should consider joining this group. They have been coming to the sanctuary for at least 8 years. However, we normally allow tripods only on scheduled private group visits, not on public open days.