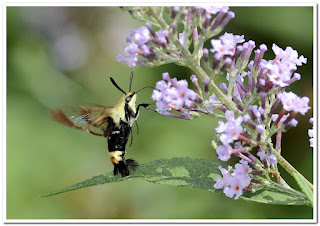 We are open today 9.30-12.30 and 3-5.30. We always close 12.30-3. Yesterday  started with a strong northwest wind and almost no hummingbird activity, but later in the morning activity picked up again. The wind has greatly dropped but is now more in the north (and it is rather chilly), so I expect low activity to start with. Perhaps it will again improves as the day advances. I expect tomorrow to be a good day, especially in the  afternoon.
The photo, by Doug MacLean, shows a "hummingbird moth", also known as a common clearwing moth, Hemaris thysbe (see this Mass Audubon article: hummingbird moth; I thank John Turner for the definitive identification). It looks like a cross between a bee and a hummingbird (but is completely different from the bee hummingbird, the world's smallest bird). But there are various other types of hummingbird moth, such as the sphinx hummingbird moth (or whitelined sphinx), which looks quite different, but also has hummingbird-like behavior. I mostly see the clearwing moth during the day, and the sphinx moth at dusk. Some people tell me they get hummingbirds, but only after sunset. I have to tell them these are moths not hummers (which disappear at sunset). Others tell me they see only "very tiny" hummingbirds during the day, but they may be seeing moths instead.
Posted by Paul Adams at 7:59 AM