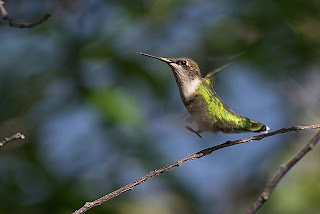 Ruby-throat migration is in full swing and yesterday morning's north wind undoubtedly triggered a drop in numbers at the sanctuary, partly recouped later in the day by new arrivals from further north. The adult males (including Fred) have already left (though there's always the possibility of a new arrival from much further north, because once the females are no longer receptive to his considerable charms there's no point in sticking around. The male plays no part in rearing chicks. The earlier he arrives on his wintering grounds (see blue on the map), the better the new territory he can establish there. The wintering grounds extend from southern Mexico, down to Costa Rica (where I've personally seen ruby-throats wintering). Once the chicks are independent (a few days after leaving the nest), the adult females will follow, and then the juveniles in order of fledging. However, each must first spend a few days fattening up to prepare for the arduous journey ahead. This makes the birds come frequently to the flowers and feeders, which is why august and september sees the most activity at the sanctuary, and of course in your own back-yard.
I too must fatten up (financially) prior to my own southward migration (in late december) and indeed my first "fall semester" lecture at the University is tomorrow. Visitors to the sanctuary (confirmed reservation required) will be greeted by members of our wonderful band of volunteers. I'll write more aboutthe fascinating migration process in my next post, but now I must review my lecture notes in preparation for tomorrow's class!
Ww are now nearing the end of our august visiting period: we will be closed after aug 31, but I hope, all being well, that we will open most days until then: keep an eye on the blog for available slots! 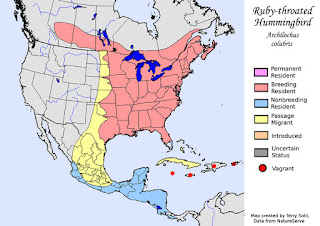 When the judge asked Willie Sutton why he robbed banks, he famously answered, "because that's where the money is". But now it's the banks and hedge funds that rob us: median household wealth declined by $5K from 2001 to 2011 (see here) but the banks etc got bailed out and are now doing better than ever. Most financial profits are reaped by a variety of legal scams, and some not so legal. The dividing line is fuzzy, and I suspect that the closer you are to the borderline, the more money can be made (like sailing close to the wind). What's puzzling is why in a democracy the financial/legal system is rigged. The best explanation seems to be that we are not really a democracy, but a plutocracy, as we always were, except for a brief period after the great depression. This is why I refer to the Wall Street Mafia, which shades imperceptibly into the top echelons of big business. In the end it boils down to the fact that in a stable economy the only way to make money is to take it from other, weaker, people. This is not true in a growing economy, but as we are beginning to realize unlimited growth isn't possible, or desireable.
The ruby-throat population is rather stable (with minor year-to-year fluctuations). Since each bird produces around 1 additional bird on average per year, it must be the case that half the population dies each year, giving an average lifespan of 1 year (I'm using a simplified statistical model). However some skilled birds (all females) make it to at least 11 years. I suspect that the main cause of death is the perilous migration - especially crossing the Gulf of Mexico. We come, via the Wall Street Mafia, full circle. 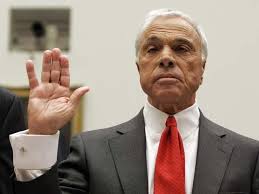 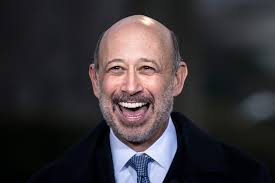