helicopter meeting report and lawsuit; difficulties asking for an appointment 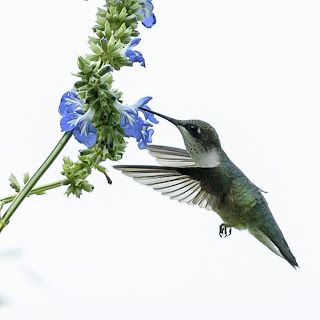 Recent photo by Steve Silberstein; the flower is bog sage

Last night I went to yet another helicopter noise meeting, in Southhold. The large room was almost full, as always. The supervisors of East Hampton (Larry Cantwell), Riverhead (Sean Walters), Southampton and Southold were there, Ken Lavalle (State Senator), Al Krupski (State Legislator), and a representative from Congressman Zeldin's office were all there, plus officers of various anti-noise group (eg the wonderful Kathy Cunningham).
Cantwell updated us on the status of their recently passed legislation, which imposes curfews and a once a week roundtrip limit. The latter provision has not taken effect, as a result of a preliminary injunction ("PI") issued by Judge Siebert in response to a lawsuit by an industry group, and as a result the noise is actually worse than ever. A PI requires there be immediate liklihood of irreparable harm to the plaintiffs (and probably  the one trip a week limit would undermine their business model). However, a PI also requires the judge to weigh the probable harm to the plaintiffs to the certain harm of the defendants (the citizens of E Hampton), and presumably the certain harm to the other East End Towns as well. Presumably her reasoning was that those suffering from aircraft are not suffering from financial harm.
And that of course is the bottom line in most of these lawsuits: nonfinancial (though very real) harm doesn't count, but money does, as we all know.

If you want to visit the sanctuary, you need an appointment. You can see how to do this at the top of the right-hand column of this blog. It's very straightforward, but nevertheless some people seem to have difficulties. I think part of the problem is that people are viewing the blog or their email on a hand-held device, not a proper computer. They cannot easily see the info, they make typing errors etc. If you have any difficulty I suggest using a proper computer before asking me to help.