Other Types of Hummingbird, in the Eastern US; Closing is Nigh, but still availability sat-mon. 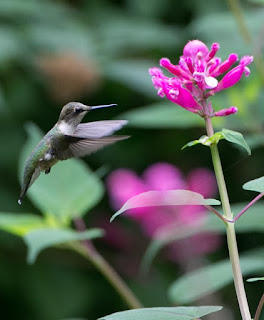 There are around 340 species of hummingbird in the Americas (a species is a variety that does not normally interbreed with other varieties). They are found from Alaska to Tierra del Fuego, but only the ruby throat breeds in the eastern US (basically because this is the only species that has evolved the trick of crossing the Gulf of Access). However several of the US's western species can be seen rarely but regularly in the eastern US (but do not breed there). These are "vagrants", and the commonest vagrant species is the Rufous. In the winter of 2012/13 James Conforti hosted a rufous right here on Long Island, in Mount Sinai; here is one of my blog posts about this hardy soul, who we called Nemo, because he arrived during that winter storm. Rufous hummingbirds breed in the north-western US, up into Alaska, and migrate to Central America for the winter (mostly the Mexican state of Guerrero), but storms can bring them as far as the east coast (mostly in the South). Here is a map showing recent sightings of vagrant Rufous. Notice there's even a report in Nova Scotia! The reports include some cases where the observer could not decide between a Rufous and the very similar Allen's.
We will be closing for the season after monday aug 31, though of course personal friends are always welcome to visit (with notice and arrangement). There are still some openings available aug 29-31.
Here's a nice butterfly (american painted lady; Vanessa virginiensis, on Zinnia, shot by Bob Immoor: 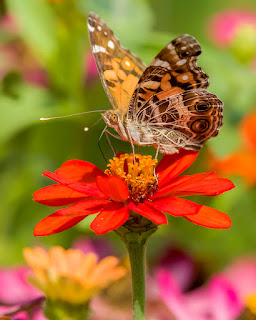